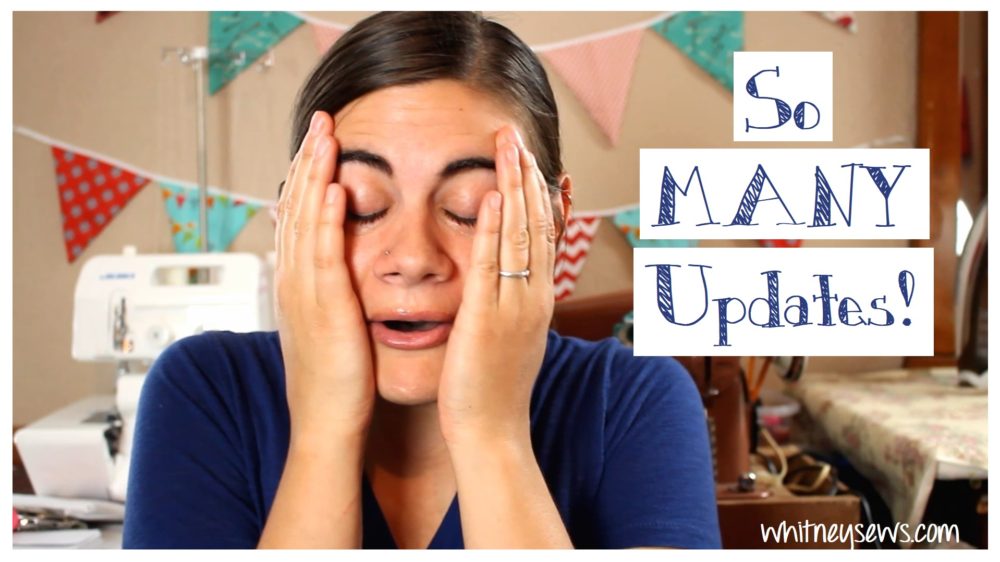 This week I wanted to share some life updates.  We had a crazy busy summer and I thought I would take a few minutes to let you all in on everything.

I’ve been wanting to do this update for a few weeks and had planned on posting it on a weekend as a bonus video…but to be honest I felt a little burned out this week.  I wanted to talk about this because I know as a sewing youTuber it can appear that I am always full of creativity and have an endless amount of ideas and sewing energy.  It is true that having people expecting weekly content and wanting to put out great quality tutorials can be a fantastic motivator at times.  But I am human and there are times when my energy hits a wall…and that happened this week.  I actually have a few tutorials already filmed and ready to be edited, but editing was the last thing I wanted to do.

So instead I bumped my schedule around and am sharing my summer/life update today.  Chit chat videos are the quickest things to edit (so very little time actually spent at my computer) and that quick success will (hopefully) motivate me to start working on next week’s tutorial a little early.  This time around it was editing, but most of the time when I lose my motivation it has to do with sewing.

I think as sewers we all eventually come to a point where we run out of steam and don’t want to sew. Sometimes it’s because we have run out of ideas that interest us; other times it’s because of project failures making us feel like everything keeps going wrong.  So here’s a few tips for regaining that sewing motivation.

The first thing I try is simply taking a break.  If I’m not feeling like sewing I do something else – maybe lay in bed and watch a movie, read a book in one sitting, or cook something new.  If that doesn’t work I look through my unfinished projects and see if one of them inspires me to pick it back up.  If I’m still not inspired I’ll try to think of a very easy and quick project.  Something I can whip up really fast and keep running on that energy into another project (the exact same concept as editing the quick chit chat video to motivate me to edit the next).  And finally if none of those worked I will power through it!  I sometimes end up having to make myself work on a project, even if I’m not into it at all.  Most people don’t really have to do that last one, but I look at it like the old adage of getting back on a horse after a fall.  I can’t let my failures or lack of motivation keep me from something I love as much as sewing.  Motivation will come and go, but my love for sewing is here to stay!  Plus since I do need to create content on a weekly basis I can’t let myself stay in a sewing funk very long.

Enough chit chat – HERE is my video about all the things my family and I were up to this summer!

I hope you enjoy the video and found at least one of my tips motivating.  Until next time, Happy Sewing!