This Halloween I was challenged by Central Oklahoma Goodwill to create a costume using items found at a Goodwill store. I thought it was a fun idea so I took on the challenge and made a costume from the thrift store. The costume I made is Vanellope from Wreck-It-Ralph.

Before I headed to the store I made a list of costumes I could make based on different characters who wear normal-ish clothing. So clothes I could find at the thrift store and after some small DIYs, look like what the character wears.

One character I really wanted to do was Vanellope. So when I found the aqua hoodie I was so excited! The hardest part was obviously her mismatched striped leggings. I ended up making them using two different striped t-shirts.

You can see all the DIYs I did in my youTube video HERE!

I’m so thrilled will how the costume turned out! It’s really comfortable since I made it from real clothing. Since I cosplay and attend several conventions each year I will definitely be wearing this costume many times. What thrift store costume would you put together??

Until next time, Happy Sewing 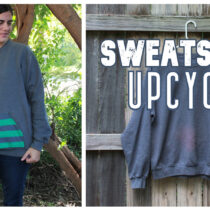 Several years ago I was wearing a sweatshirt and remembered how much I prefer hoodies for their kangaroo pockets. I decided right then that I needed to make a kangaroo pocket tutorial using a t-shirt as my material. It took... END_OF_DOCUMENT_TOKEN_TO_BE_REPLACED
Now that I have completed my huge costume project (which by the way, I won BEST IN SHOW!) I am back to working on some other sewing projects. First on the list was a quick pair of shorts for my... END_OF_DOCUMENT_TOKEN_TO_BE_REPLACED 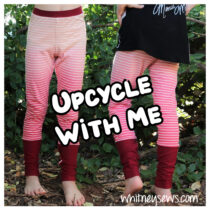